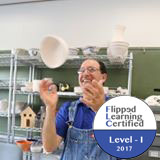 I took my first ceramics class, after returning from a tour in Vietnam, at Moorpark Jr. College in 1968. I continued taking ceramics classes at UC Santa Cruz from 1970 to 1972. Made a very meager living doing ceramics from 1973-1974. In 1975, I began working for the State of California and ceramics became a hobby with wheels and a kiln at home. In 2000, in preparation for retirement from State Government, I started working at UC Davis Craft Center mixing glazes. In 2002 I began teaching Beginning Wheel Throwing at the Craft Center, evenings and weekends. In 2006, after retiring from State Service, I started teaching Ceramics at Christian Brothers High School where I am today. In 2013 I went to an ISTE conference where I was introduced to Flipping. That summer I made videos and flipped my class. Though I have always enjoyed teaching ceramics, I have never enjoyed it as much as I do today and credits that increased enjoyment to having flipped my classroom.