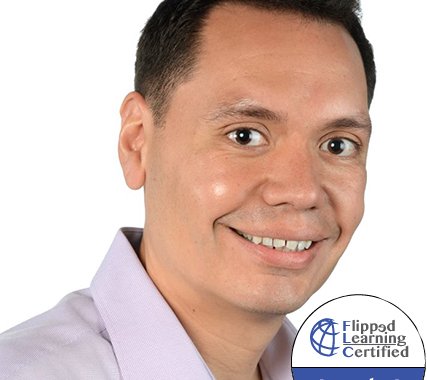 I have been teaching technology and media classes abroad in Korea for more than nine years. The first chapter of my career included being an award-winning television commercial producer after graduating from Wayne State College in Nebraska. Part of that job included making instructional videos for corporations. I began enjoying that part of my job. I went to graduate school at Emporia State University in Kansas originally to be a corporate trainer. Part of my program included helping teach future educators about technology. The passion of my students and my advisors was simply contagious. I was not in the program long before I began considering transitioning from the corporate strand of our program towards education.

After earning that degree, I moved to Korea because the nation shares two passions with me: education and technology. This has been a wonderful place for me to grow professionally and revitalize my curiosity about culture and the world. I taught for 5.5 years at a nice university named Hannam University. Our department (Linton School of Global Business) was named as one of the top 1% of departments in the country. I helped students create a culture of video creation to change the culture on campus. They made a difference in international recruitment of students, retainment within our program and graduation levels. During these years, I became an Apple Distinguished Educator.

Being around other passionate Apple Distinguished Educators, I became motivated to teach in international schools. I made the transition three years ago and have thoroughly enjoyed teaching media classes and serving as the Technology Integration Specialist at Busan Foreign School. Next school year, I will be transitioning to a similar role at Raffles American School in Iskander Malaysia, which is right across the river from Singapore.

I am excited to work in the very new school with an extremely new campus. I hope to implement more aspects of Flipped Learning with my new position as well as help other teachers.