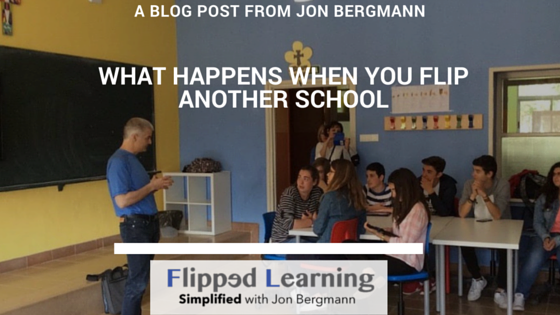 Prior to kicking off the inaugural FlipCon Spain 2016 this past week, I had the chance to visit the first flipped school in Spain. San Gabriel is a K-12 school which up until two years ago was on the decline. The school is located 30 minutes north of Zaragoza, Spain and is housed in an old Catholic Seminary. For many years test scores were declining, and parents were choosing to send their children to neighboring schools. The staff realized something needed to change, and they reached out for help. The help came in the form of Raul Santiago, a professor of Education at the Universidad de La Rioja and MT Groupo, an organization which, among other things, is bringing the Flipped Classroom to Spain.

What happened in the span of two short years is remarkable. The

school increased its enrollment from 200 to 400 students, and many more are planning to attend next year. Hundreds of educators from around Spain have visited the school to see the transformation in person. Teachers love their school, kids are happy, active learning is now the norm, and their standardized tests scores are up.

During my brief visit, I had the chance to talk to the leadership of the school, the teachers, and most importantly, the students. I would like to share a few vignettes from my visit.

Some of the teachers from San Gabriel

• A Teacher’s Perspective: In the hall before lunch I talked with a science teacher who had been at the school for fifteen years. She told me that she knew they needed to change, but was afraid. She stated that when they started exploring the flipped class, she realized it was time for her to update her skills and learn some technology. She embraced the model and began to see how well flipped learning was helping her students. My final question to her was: “Could you ever go back?” With a big smile on her face, she said, “Absolutely no!”

• Students’ Perspective: At one point, I was ushered into a room filled with approximately 50 teenagers just to visit with them. I was just about moved to tears as they gave me a long round of applause. I had not realized how big of an impact flipped learning had made on these students. They feel like they are a part of something larger than themselves, and that by attending San Gabriel, they will have greater opportunities in life. They had prepared many questions for me. We discussed the origins of my journey with flipped learning, its global impact, and how the model has changed over time. I then turned the conversation around and asked them what they thought of being in such a school. They shared with me that they now love their classes because their school is an active place of learning. They emphasized that they now have better relationships with their teachers and each other. Later they interviewed me for their school podcast, and then I interviewed them for my radio show.

It takes courage to change, and that is exactly what the staff and students at San Gabriel have. Administrators and teachers had the courage to take an honest look at their situation and realized they needed to change. They researched models and found flipped learning. The remarkable thing is that they embraced the change, and the impact on the lives of their students is evident. Since San Gabriel has become a model school for Spain, I foresee that what happened there will be repeated across all of the Spanish-speaking world.