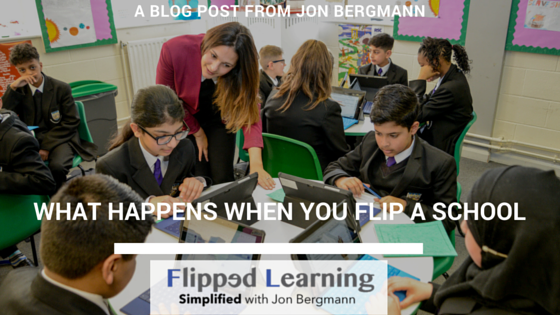 Last month I had the privilege of visiting the Shireland Collegiate Academy in Birmingham, United Kingdom. I, along with Lord Jim Knight, Sir Mark Grundy, Kirsty Tonks, and their whole team, led FlipCon UK 2016. This was the first ever FlipCon (Flipped Learning Conference) in the United Kingdom. Although I was there to share my experiences with Flipped Learning to the delegates, I came away changed.

The Shireland Collegiate Academy faces many challenges. It is located in a neighborhood where the native language of most of the students is not English, and many live with significant economic disadvantages. Despite these challenges, Shireland is a place of learning, growth, and most importantly, hope. I experienced a staff that believes in their students, values their progress, and expects great things of every pupil. It is a school where relationships take precedence and each student thrives. As I interacted with the students, I watched them taking ownership for their learning, self-assessing, and being advocates not only for themselves, but each other too.

Since it was the week before Easter, students in one class were exploring the story of the crucifixion. Though most of the students were not of the Christian faith, they all took part. The students were in groups of three and they were tasked with asking each other what it felt like to be a certain person in the Good Friday story. I jumped right in and took the role of one of the Roman centurions. Without missing a beat, my group asked me why I did what I did, how I felt about what I had done, and they challenged me about my motives. Though the Good Friday story has great personal meaning to me, I sensed in these students a genuine interest in learning from each other and entering history.

The story of the school goes back a number of years where the headmaster, Sir Mark Grundy began a transformation of the school. The school was in distress and Sir Mark was looking for solutions. He led a number of initiatives until the school settled upon flipped learning. By implementing the flipped classroom, they realized they had a way to personalize the learning for each child. They essentially have adopted a Flipped Mastery model where students must master content before moving on. Students are assessed around a series of competencies – those who struggle are given appropriate remediation and those who are ahead are allowed to soar. In the end, all students have the opportunity to experience success, because the model provides time for deeper student-teacher and student-student interactions.

The impact of this has had far reaching benefits for the students and the community. Students’ standardized test scores are up and they take pride in their learning. The model has been so successful that schools from around the UK are lining up to learn about what happened at Shireland. It is also spreading to other schools in the region. Many schools were part of the “Maths Flip” project which has shown significant success in raising student achievement in mathematics in their primary schools. My wife, Kris visited one of the primary schools participating in the Maths Flip project. She was impressed by many things, but one of them really stood out. It was the acronym: JOBS. It stands for the Joy Of Being Stuck. What a wonderful concept to teach young children. Instead of being frustrated with and paralyzed by challenges, the pupils learn strategies to help them get “unstuck”.

But you may ask: HOW did they do it? How did the transformation take place? In a nutshell, there was great leadership, great vision and a belief in students. I plan to write more about “how” to flip a school later, but understand that it can, and is, happening. Shireland’s story is amazing, and the good news is that it is also repeatable and scalable. I have seen and helped other schools go down this path with great success.

Is flipping your school possible? As Sir Mark Grundy said during his keynote address, “If it can be done at  Shireland, it can be done anywhere.”  What challenges do you feel need to be overcome for your school to thrive and grow? Or if you have had successes, what were the key elements?