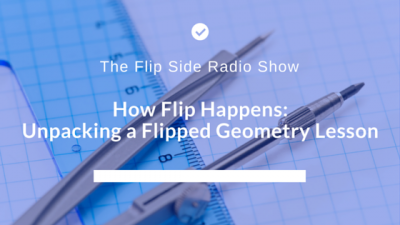 A new episode of the Flip Side:  How Flip Happens: Unpacking a Flipped Geometry

Lesson:  I had an amazing interview with 4th grade teacher Jessica Gardner (@jgards514) as she describes how she flipped a geometry lesson.  So if you are interested in hearing how to flip one lesson well, then this is the podcast for you.  If you like it please feel free to share it with your networks.  http://www.bamradionetwork.com/the-flip-side-with-jon-bergmann/3337-making-it-work-unpacking-a-flipped-geometry-lesson