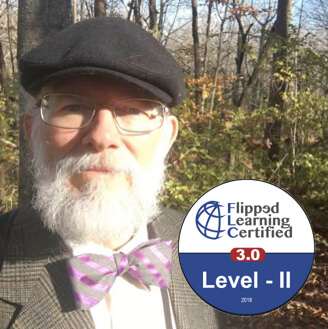 David Largent is an experienced, learner-centered university lecturer with nearly 40 years of experience in systems analysis, programming, database design, teaching, overall business operations, and managing an information technology department in a medium sized company. After working in industry for nearly 30 years, he returned to academia and completed a MS in Computer Science at Ball State University in 2010. He has been teaching full time at BSU since then.

During his teaching, he has adopted classroom student response systems (2010), flipped learning with active learning (2012), learner-centered pedagogy (2014), the entrepreneurial learning mindset (2016), and specifications grading (2017). With each addition, he found the new approach to be complementary, rather than exclusionary, and as such is utilizing all of them in his courses today.

In addition to his teaching responsibilities, he has presented at numerous conferences, and published a variety of journal articles and book chapters. He also serves as a chapter advisor for Golden Key International Honour Society, and as a leader in the Boy Scouts of America. During many past summers he served as the camp director of a local scout camp. More recently, he has been teaching summer classes, and exploring the world.

Dave enjoys being part of other’s learning, and especially likes seeing a “light bulb” turn on when something suddenly “clicks” for a learner. He also finds it very rewarding to mentor young adults as they take on, and learn the meaning of, leadership.